Erika gets a new footboy

Miss Erika is out with her friends. While their friends enters the bar, Erika stays outside to smoke a cigarette. Then a man addresses her and Erika thinks that he could be a good slave. She orders him to like her shoes until they are clean. Later on she sits down on bench, takes off her shoes and the Loser kisses and licks her feet. Erika is very satisfied! 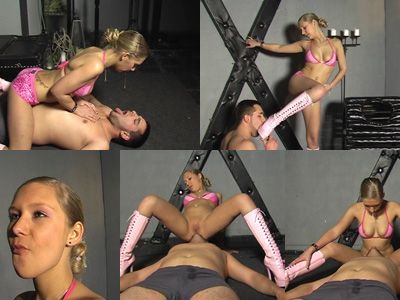 2 goddesses get a boot licking

Lady Chanel and her friend Miss Lori both got a foot slave lying on the floor in front of them and order these pathetic slaves to worship their high heel boots! The slave's have to kiss and lick the dirty soles and the mistresses also use the slaves' mouths as their ashtrays. The girls just casually chat and enjoy their cigarettes - treating men like shit under their feet is just normal for them!

Destiny's in the right mood to humiliate her foot slave when she returns home. She sits down on the kitchen countertop and orders him to lick her filthy boot soles for starters. When he cleaned them she takes her boots off and presents her sexy dark nylons to him - which are really sweaty after a whole day in those high heel boots. He has to smell and kiss them anyway and when he complains about the smell she just spits into his face! In the end he gets to lick all the sweat off her bare feet too and she orders him to suck her toes!

Mistress Destiny comes home and her boots are really filthy after walking the whole day after rainy weather. She calls her slave over and makes him lick these dirty boots. He has to lick her boot soles clean completely before he gets to worship her sweaty nylons and bare feet. To humiliate this poor loser even more she spits in his face a few times too!

Mistress Crystal's high heel boots are dirty and she calls for her foot slave to clean them - with his tongue! He has to lick all the dirt from her boot soles and suck the heels clean. She later stands up, steps on his hands and orders him to kiss her boots while she crushes his hands under her full weight. This mistress knows how to properly treat a slave for sure.

Cassandra comes back after hours of shopping and is really pissed when she comes home and notices her slave didn't clean the house properly - now he'll be punished! She sits down and orders her slave to get on his knees and lick the filthy soles of her high heel boots clean. He has to lick all the dirt and then "blow" her heels like he'd suck a cock. But even that's not humiliation enough for the slave - so Cassandra takes off her boots and smothers the slave under her sweat-soaked socks while verbally humiliating him.

Mistress Katja just got back from the mall with a brand new pair of shiny black boots. After admiring their beauty on her couch, she calls in a slave to worship them. Katja commands the slave to lie on the floor, while she sits comfortably on the coach, and to lick her newly bought boots. The man slave starts licking at the toe, and then moves on to the heel. Katja forces him to lick every inch of her shiny black boots, or else he will get a very serious punishment. These boots are so gorgeous that the slave should be happy that Katja allowed him to lick them at all!

Mistress Yurizan has been working with that pathetic freak she once called her boss for more than 5 years now. She did her work good and coped any task even if it took her more time than she gets paid for. Anyway this idiot was not giving her a raise. Then she found out his little secret. The next day she sat on a chair in his office, with her high heels on his desk. He was surprised as he enters the room but before he was able to say anything, she stripped out of her shoes, and showed him her bare feet as she was looking right into his eyes! His heart was beating like never before and he knew that this moment would change his whole life. And it did. Today Mr. Chambers is just the toilet cleaner anymore, paid with less than 10% of what he earned in the old times. But sometimes, she calls out for him to inject his drug and make him stay in place. Sometimes she calls him to kneel down and stick his tongue out to touch her feet with it. The smell, the taste her evil smile. His heart beat as it was doing on that special day. The day that made manager Mr. Chambers become Miss Yurizan's toilet cleaning boy.

Dirty boots and crushed food for the slave

Dark Mistress returns home after walking in the mud with her sexy high heel boots and the slave has to worship her extremely dirty boots. But that was just part one of his punishment. She throws a burger on the floor and crushes it under her boot soles - now he has to eat the crushed food combined with mud from her boots and the floor while she spits into his face to even increase his humiliation.