All articles tagged with "Stinky Socks"

This guy was becoming too much and mistress Anfisa did not want to let him continue being like that. She wanted to shut down his nonsense and she did so by inserting her stinky foot in his mouth. She also used her heels to trample him because she wanted it to be a combination of pain as well as humiliation. That way, he would not forget either of them and would not mess with her again.

Mistresses lay on their beds and dominate foot slave

When this mistress tried to seduce one of these twins, he thought everything was going well not knowing they were playing a prank on him. He was invited to their house and as he made a move to the one he thought he had been talking to, the other one showed up pissed. He was shocked and tried to apologize but they pretended to be angered and they turned him into a foot slave and dominated him for fun.

Mistress use dirty feet to teach guy a lesson

Mistress Sabrina and mistress Kelly had a bone to pick with this guy and when they could not settle their differences well, they chose to teach him a lesson he would not forget. The mistresses first of all got him to lick the soles of their feet. The mistresses had dirty feet and he had to lick them. In addition, the mistresses trampled him and stomped on him as cruelly as they could.

Princess Serena loves to feed her losers with crazy things like with her nail clippings or with her residues from when she scraps her feet. That is what she did to this loser today and as she scrapped her heels. The mistress forced him to eat all of the things she scrapped from her feet. He was shocked but he did not have a choice. He ate them all as directed.

Mistress Shirley was in a crazy mood and she wanted to experiment with a lot of things. She is a naughty mistress at heart so she did not mind stretching boundaries. She got a loser and turned him on by teasing him. She made him fuck her feet and then she got him to lick her feet before she got him to jerk off to her instructions, which were humiliating and degrading.

Mistresses humiliate guys from the club

Mistress Gaia tortures loser for messing up with her

Mistress Gaia is not the kind of mistress to be messed with. When this loser tried it, he only had himself to blame as she trampled him and she made him lick her fee which were sweaty as well as smelly. She did not give him enough breathing space and it was pure torture for him. She had her high heels ready to torture him further if he did not obey her. 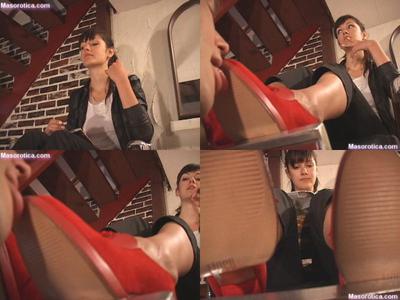 Princess Serena gets her shoes licked

Princess Serena wore her boots and used them to humiliate this loser. She wanted her shoes licked and smelled and that is what her slave did. He did not have an option but to do what she ordered him to do. He knew failure to do so would attract an even harsher punishment so he licked and smelled her boots as well as she wanted. He even impressed her with his shoe licking skills and she rewarded him.